Popular
The Benefits of a Point of Sale System...
JoinPD: PearDeck Login and Registration Process 2022
How to choose the best Moving Company?
Avelo Airlines: How does it Work in 2022
Why Should You Consider Purchasing a Payroll Business...
How to Check Airpod Battery Health in 2022...
How Data Masking Can Be the Future of...
How To Register A Business In New York...
A Beginner’s Guide To Network Segmentation
Benefits of Working for the Federal Government
Home Education Everything you need to know about the PEMDAS rule
Education

Everything you need to know about the PEMDAS rule 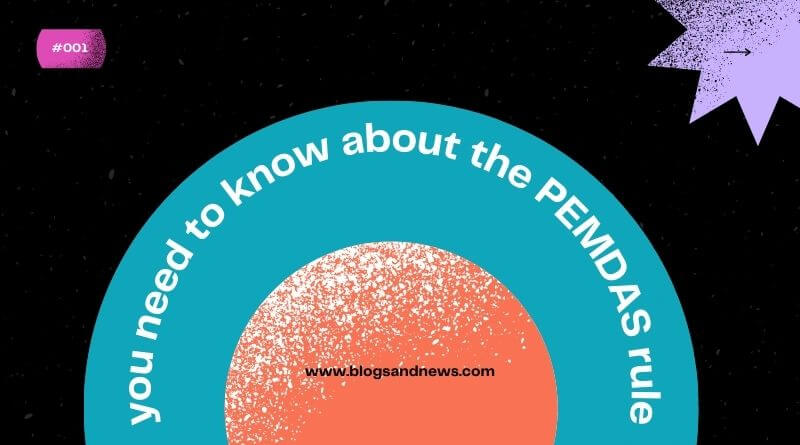 In the subject of Mathematics, there are different rules. There are rules for higher-order mathematical operations such as calculus, algebra, etc. There are rules for elementary-level mathematics such as arithmetic operations. PEMDAS rule is one such rule. PEMDAS is the abbreviation for Parenthesis Exponents Division Multiplication Addition Subtraction. This rule is used as a thumb rule for solving problems where more than one arithmetic operation is present.

The order of operations should proceed accordingly.  For instance, we consider the following two situations:

As evident from above both of the guys got different answers. But the point is why? The answer is both of them using different methods. Aarav followed the PEMDAS rule while Bikram didn’t. According to the PEMDAS, rule multiplication comes before addition. So we can conclude Aarav’s answer is correct.

Comparison between BODMAS and PEMDAS

BODMAS is the acronym for Bracket Of Division Multiplication Addition Subtraction. If we go along the line of comparison between the two then we can observe that the only distinguishing factor between the two is the presence of the “Exponential” factor in PEMDAS. This makes the BODMAS rule vulnerable in the case of algebraic operations but works just fine in the case of most of the arithmetic operations. Whereas the PEMDAS rule works glib in algebraic operations as well as arithmetic.

Rules to consider while using PEMDAS

According to the name and full form we see that these are nothing but rules written for operation is the correct order.

The most common topic of mistake is where multiple brackets are used. Brackets such as large, curly, and small often tend to create unnecessary confusion. To steer clear of such confusion one must always follow the rule of operating on brackets in order starting from small then curly and then at the end large bracket should be dealt with. Following this thumb rule decreases the scope of committing errors by leaps and bounds.

PEMDAS might seem quite tricky by both its name and nature. The learning experience can be quite intimidating for beginners and they might feel perplexed. But Cuemath has got the back of those beginners. With its fairly simple teaching method, it becomes very easy for beginners to absorb knowledge and know the ways and means of PEMDAS.

The most primary purpose of PEMDAS can be witnessed in topics where exponential expressions are involved. As BODMAS can’t be used in those cases so a different rule was of paramount importance. With the introduction of PEMDAS, the provision for exponential factor also came into existence and thus the void left empty by BODMAS came to be fulfilled by PEMDAS. This eased mathematical operations in fields such as arithmetic, algebra, calculus, binomial, etc. Such vast is the importance of PEMDAS in mathematics.

Upon retrospection on the facts and details mentioned above about PEMDAS. It can deduce that usage of PEMDAS cannot be neglected as it has a very important role in shaping the very foundation of elementary maths. Also, it fills out the void left by BODMAS to accommodate the exponential term.

Why it Continues to be Important that you Accurately Forecast Demand

What can you add To Your Summer Wardrobe to Match Your Hat Style?
by admin August 3, 2021
Transcription Work-at-Home Steps to Get a Transcription Job Online
by admin March 29, 2022
Finance Division Govt Jobs 2020 in Pakistan
by admin January 21, 2020