Popular
Tips for Searching Online Assignment Help
Things To Keep In Mind When Visiting Europe...
Maintain a Clear and Healthy Drainage System with...
Jose Antonio de Anda and his 2023 perspective...
Tips to Motivate Your Kids to Dress Up...
Experion Windchants – High-End Residential Project In Gurgaon
Why Should Disaster Restoration Service Be Your Next...
The Home and Smart Technology
What are Employment Disputes, and How Can an...
Learn 5 Common Colors That Attract Customers
Home ENTERTAINMENT 11 BIG HOLES IN THE PLOTS OF MARVEL MOVIES
ENTERTAINMENTFilm industry news

11 BIG HOLES IN THE PLOTS OF MARVEL MOVIES 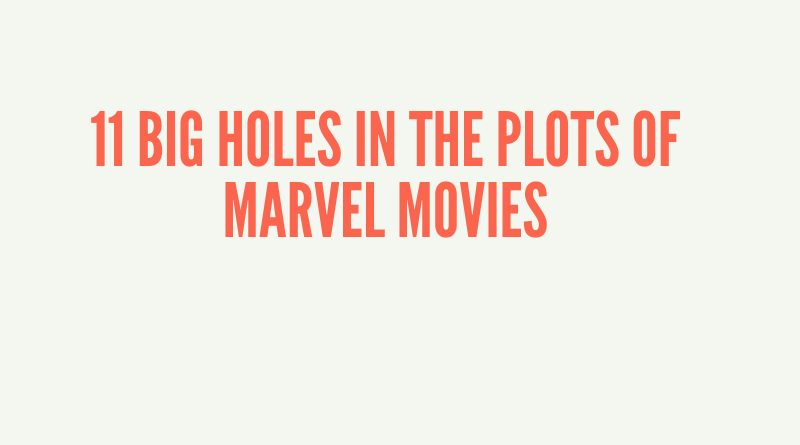 The MCU grows every year, which means that it does not stop increasing the connections between the different franchises that form such an extensive network. Therefore, it is inevitable, given how complicated things are getting, that there are inconsistencies in the frames and large unfilled holes. Here are 11 that we cannot ignore – Marvel MCU Plot Holes

The great and emotional ending of ‘Thor’ left him with the Bifrost destroyed, with no possibility of returning to earth or seeing his beloved Jane ever again. However, in ‘The Avengers’ he is immediately back to earth. And also does not even try to find his beloved for a moment. Come on, it completely undoes what we were told at the end of ‘Thor 1’. Also, going back to Asgard doesn’t seem like a problem either. On top, the bridge is separated for the sequel, ‘The Dark World’, without further explanation and all this disaster is not mentioned again.

In ‘Ant-Man’, Hank Pym explains that his particles shrink objects by reducing the distance between atoms. Which makes all the sense in the world until those same particles allow you access to the Quantum Realm. Quantum Realm which is subatomic. If the spaces between atoms are what is reduced but not their size, you cannot be smaller than an atom. So Hank, explain yourself again, your secret is safe with us.

We know it was included only as an Easter egg, but Marvel should be more careful with these things. We mean when we see an Infinity Gauntlet, with its six gems, among Odin’s artifact collection in the first ‘Thor’ movie.

Yes, Hela explains in ‘Thor: Ragnarok’ that the glove was a kind of fake, but it is clearly an excuse to remedy the mistake made.

As you may already know, Thanos has something very special with the Infinity Stones. To obtain the gem of the Tesseract, he enlists the help of Loki, a lying villain with a long history of defeats at the hands of superheroes. He must have inflated his resume very well because Thanos even leaves him his scepter in control to help him.

Let’s remember that this center contains the Mind Stone, the only Infinity Stone that Thanos had. Naturally, Loki loses it. The question is why does Thanos so easily leave his only Infinity Stone? Do not tell us that you did not know that the gem was there. Also, if it’s to control the Chitauris, why does everyone fall apart when their main ship explodes and not the scepter?

Drax (Dave Bautista) from ‘Guardians of the Galaxy’ is of a completely literal race. In other words, it cannot catch any kind of metaphorical language. However, that doesn’t stop him from calling Gamora “Slut” and “witch”, or telling his friends that he cares “shit.”

To empower his suit and prevent shrapnel from killing him. Tony Stark and Ho Yinsen create a mini reactor on his chest. This is what serves Iron Man to give power and energy to his suit. And little by little he is improving it. But if this reactor is an inexhaustible source of energy, why in ‘Iron Man 3’ he wanders around Tennessee until he very slowly charges his armor in a garage? Despite being one of the very early Marvel’s movies, it has earned a good box office collection of around 121.5 crores USD.

The climax of Ego’s plot in ‘Guardians of the Galaxy 2’ shows how he places plants on planets throughout the universe to absolve them. One of these planets is supposed to be Earth. So what do the Avengers do when these creatures appear to swallow entire cities on their planet? No one appears, and no one ever names this impressive event that it is supposed, also happened to the earth.

Do you remember Thor’s vision in ‘The Age of Ultron? Yes, the one they forced Joss Whedon to do, pissing him off so much that it was a fundamental factor in his abandonment of Marvel. Well, it seems that, in the end, that vision was not so important. If everything pointed to the end of the movie that Thor’s mission was to chase the Infinity Stones, the fact is completely ignored in ‘Ragnarok’. Well no, in Ragnarok it is slightly mentioned that Thor tried to search for the Gems, failed, and gave up. But in ‘The Age of Ultron’, his vision seemed to tell us that he knew exactly where the Gems were.

Probably, it was a deliberate decision to ignore this compromising ending to give more freedom to the Taika Waititi story. Poor Whedon.

Fans think ‘Doctor Strange’ takes place in 2020. As Pangborn’s X-ray tests take place in 2014, and we know it took him 6 years to get back to playing basketball when Doctor Strange meets him. But even if we ignore this and place ‘Doctor Strange’ shortly after 2014, why is no one considering him as a person of interest in ‘Captain America. The Winter Soldier’, 2014?

Is Strange’s journey to becoming the grandmaster of ancient magic so accidental and covert that no one knew until ‘Infinity War’?

‘Homecoming’ begins in 2012, during the cleaning of the battlefield after ‘The Avengers’. Later they announce to us that eight years pass. Which means that the film takes place in 2020. We go that, like ‘Doctor Strange’, it bothers the timeline.

The desire to place most of the plots in the present and the future means that films have to accumulate things in very little space, creating serious coherence problems on timelines. The Russo brothers have already admitted that the “eight years later” jump could not be correct. As it would place the first part of Spider-Man after even Thanos’ snap.

In ‘Civil War’, Wakanda supports the Sokovia agreements. King T’Chaka states just before the explosion: “The blood of our people is spilled on foreign soil, not only because of the actions of criminals. But because of the indifference of those who promised to stop them. Victory at the expense of innocents it’s no victory at all. ”

Words that leave the scene of ‘Black Panther’ quite badly. In which T’Challa gets into a great fight in a casino. And that ends in a chase with several car explosions and, surely, innocent victims. Also, his idea of ​​killing the Winter Soldier in the ‘Civil War’ seems more like Killmonger than the T’Challa we see later. Come on, either this boy is a little confused. Or Ryan Coogler was forced to follow the rules established after the ‘Civil War’.

I was looking through some of your content on this internet site and I conceive this site is very informative! Keep on putting up.

that was impressive article thanks

How far has the prepaid recharge system come?
by John Milton January 2, 2023
Get Ready to move in Hosted QuickBooks environment now!
by admin February 17, 2022
Touchcric: Watch Live Cricket Streaming on Mobile in 2022
by John Milton September 14, 2022